Take a tiny 50cc Monkey Bike and wobble forth into the Sahara Desert. Then force it up and over the Atlas Mountains and finish in a dusty cloud of glory just outside Marrakech.

This is a perfectly balanced adventuring recipe with equal measures of pain and glory set to the soundtrack of other people’s laughter. They’re laughing at you because you’re pushing a Monkey Bike up a mountain. You’ll be grinning because you’re driving the world’s most perfectly unsuitable adventure machine across Morocco.

You can also do the Monkey Run in Peru and Mongolia.

We provide the start line and the finish line. The bit in between, or the unroute as we call it, is entirely up to you. If we told you where to go it wouldn't be a proper adventure. So ditch the smart phone and get totally lost. Morocco will deliver. Expect sweaty desert, endless plains, snow capped mountains, river crossings, back roads twisting through epic gorges, bike-mangling off road tracks and lots of camels. 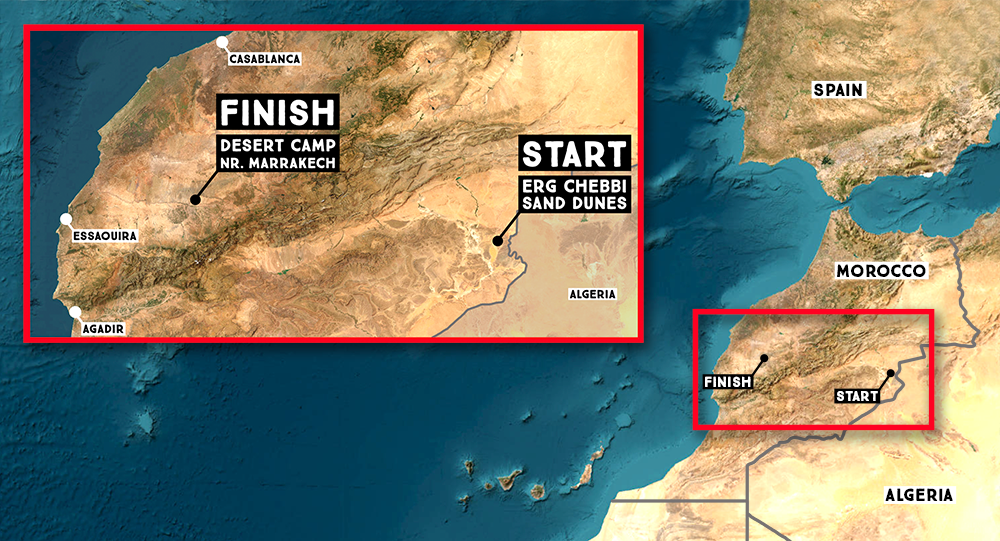 You start from the edge of the Sahara in southeast Morocco. The iconic sea of 150 metre sand dunes tower over your test driving arena at the Monkey Run camp. 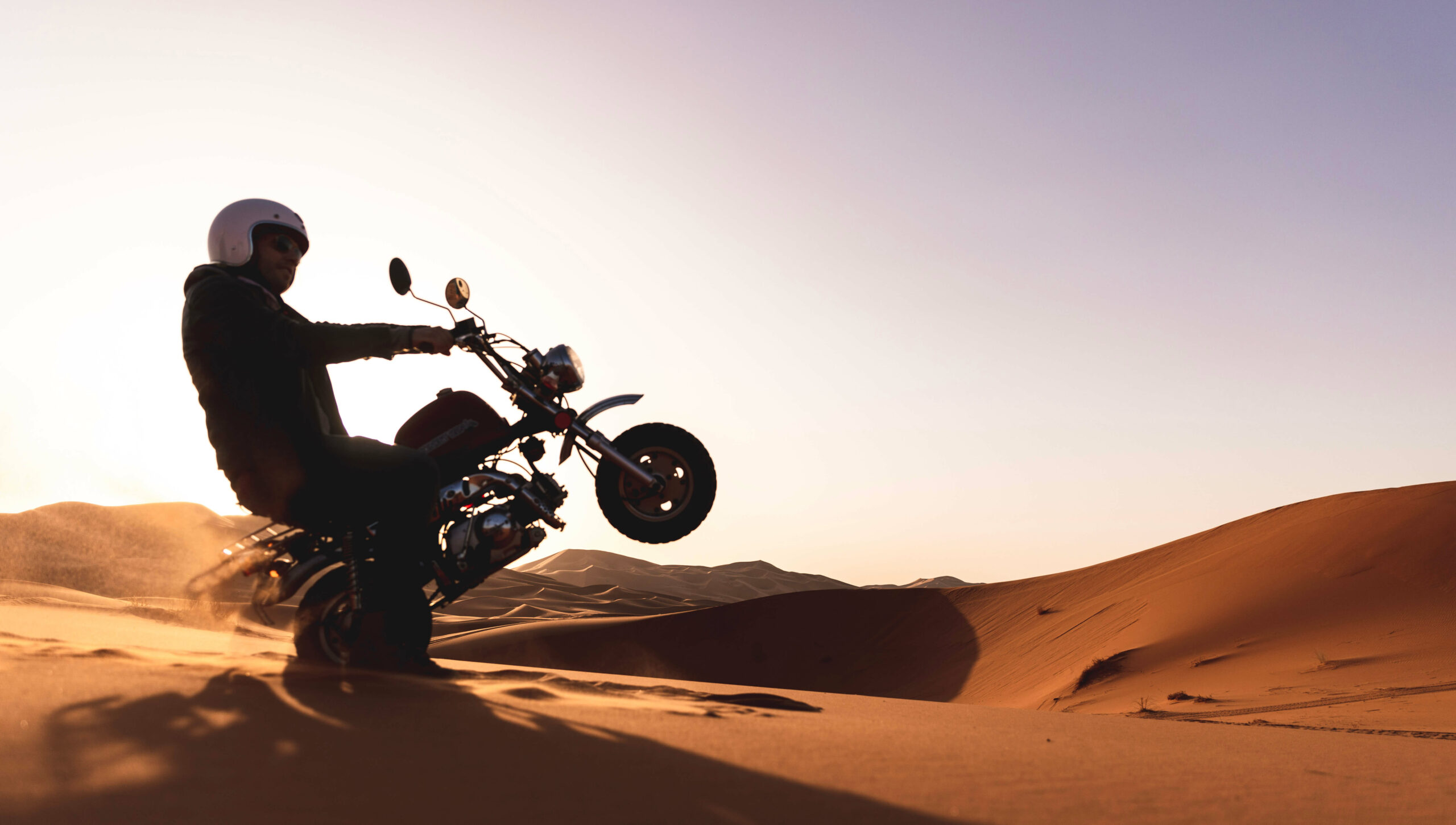 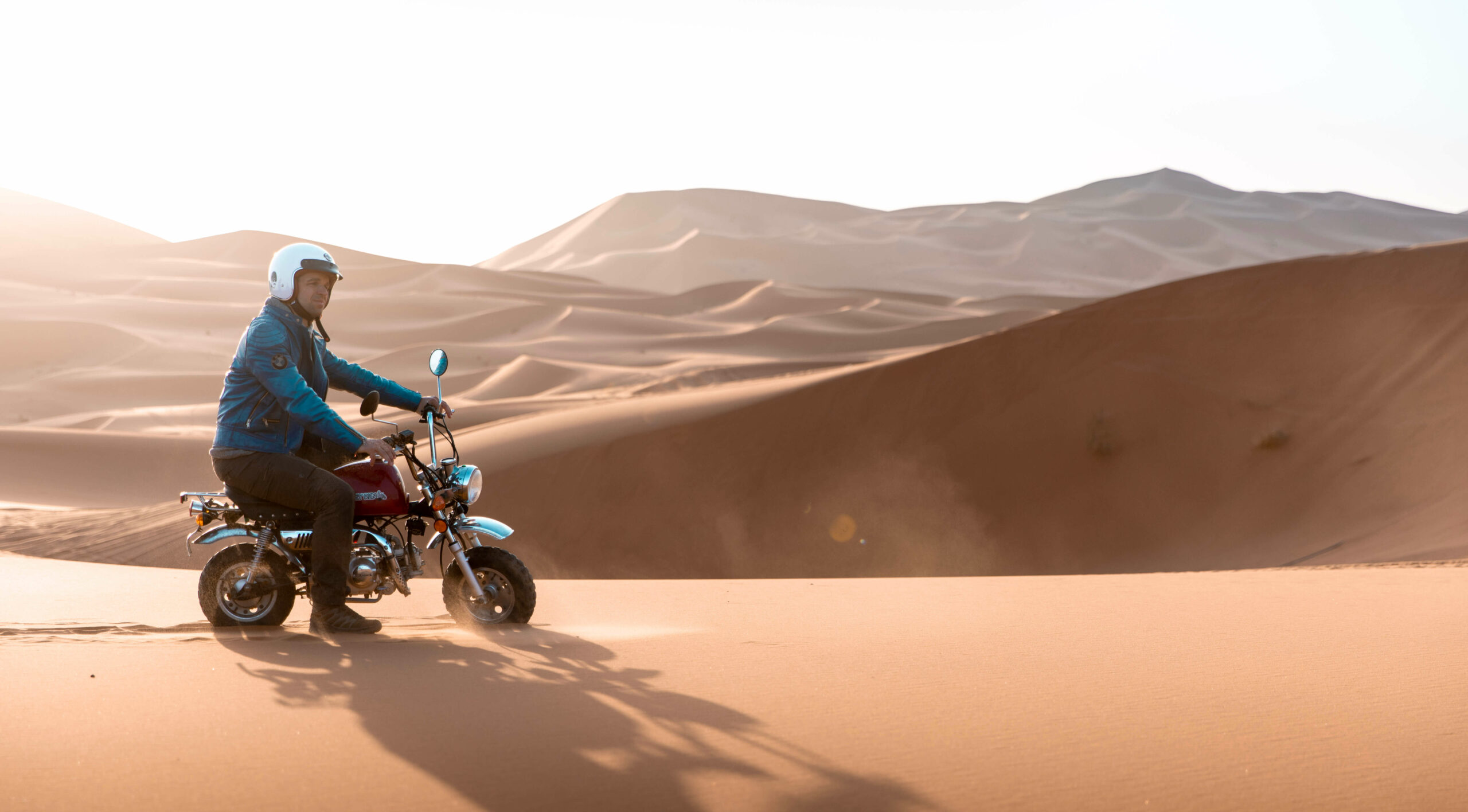 Heading north you wobble out of the desert on a few kilometres of rough track towards Erfoud. This area is famous for being used as a giant film set. And looking a bit like Mars. If Mars had camels.

From here your un-route journey begins with the first of many navigational decisions.

We strongly advise heading vaguely in the general direction of the Atlas Mountains via as much off roading as you can muster. Avoid the main highways at all costs and find the dirt tracks leading to nowhere. 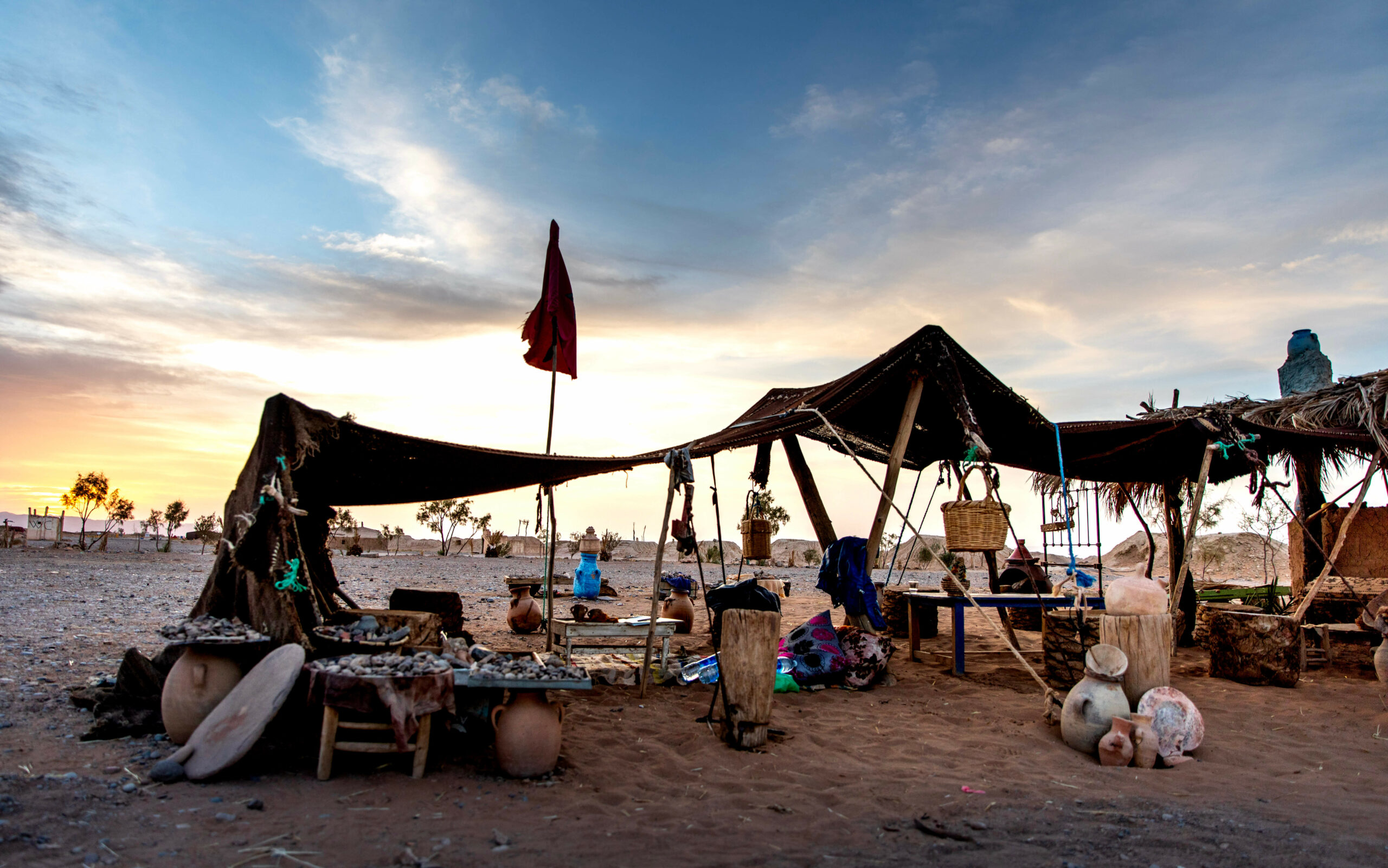 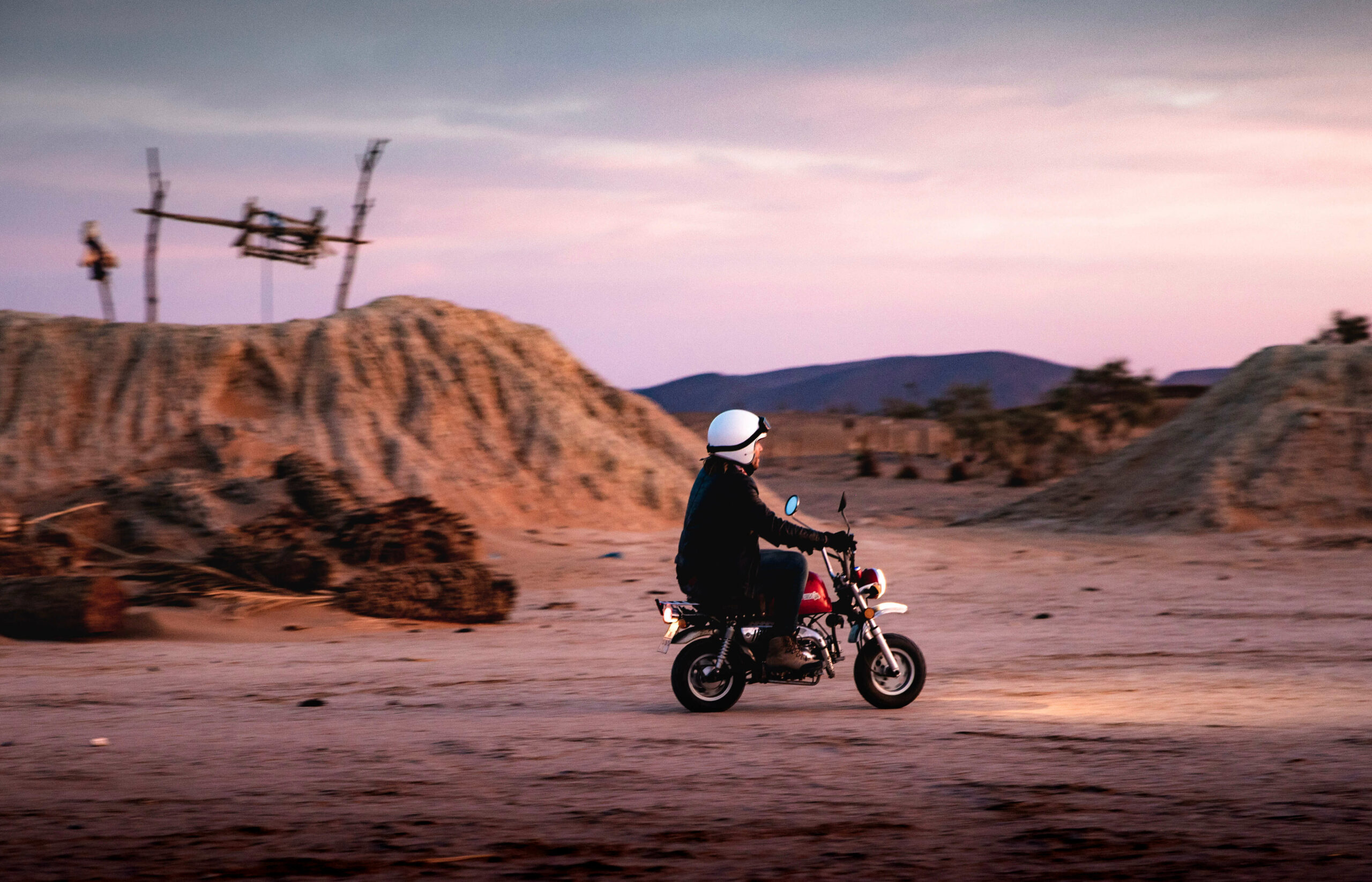 Head in the wrong direction. On purpose.

On your second day you have a choice to make that will set the tone for the rest of your adventure. So be like Mike. But not superstar athlete Michael Jordan. No, we're talking about the walking distaster of a human that is Mike 'the Catastrophe' Evans:

“We spent two days spent driving in the completely wrong direction. Two more spent on hiking trails and unmapped “roads” in the mountains, ignoring the protesting locals we kept to the mantra: “always forwards, even if it’s backwards.” On day five we met most of the other teams crossing the Atlas towards Marrakech as we happily headed in the opposite direction.

“Somehow we managed to get to the finish line for the party with the other teams but I reckon we drove in the wrong direction for 3 of the 7 days.” 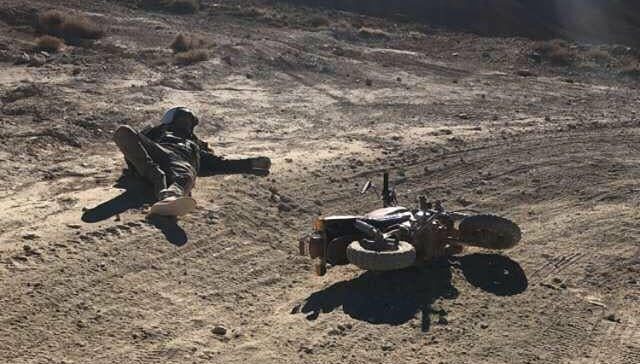 This is Mike. If you hadn't guessed. 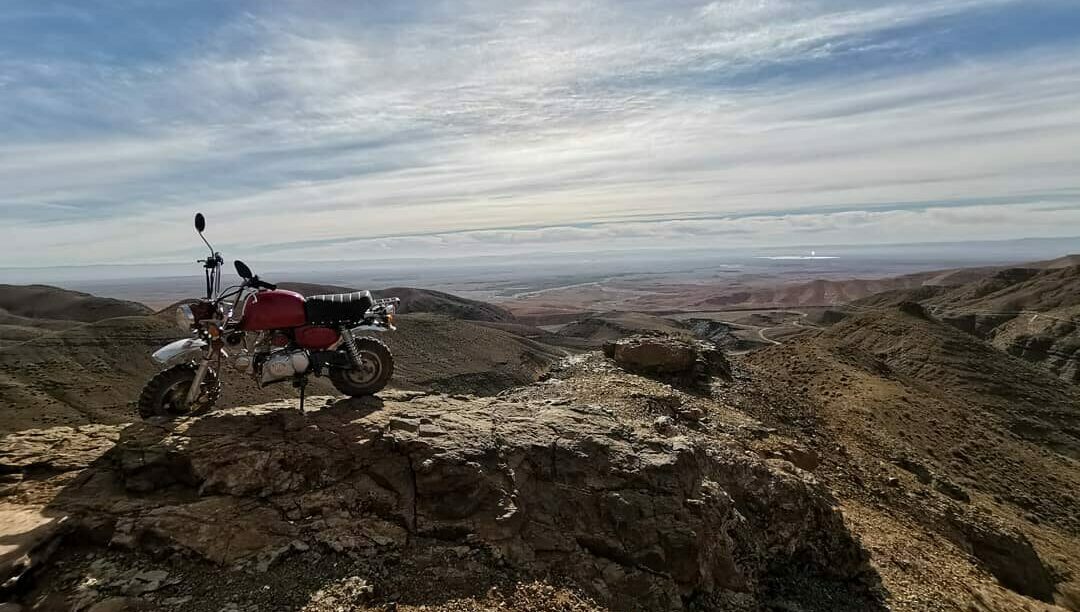 This is Mike's bike. Not on a highway.
A true example of the benefits of adventuring ignorance. Mike demonstrates that knowing where you are is highly over-rated. So make sure you avoid the main highways between the desert and the foothills of the Atlas and get totally and completely lost.

Hit the back roads

Now that you've made the wise decision to get as lost as possible, here is some of the awesomeness that will slap you about the face with adventure. 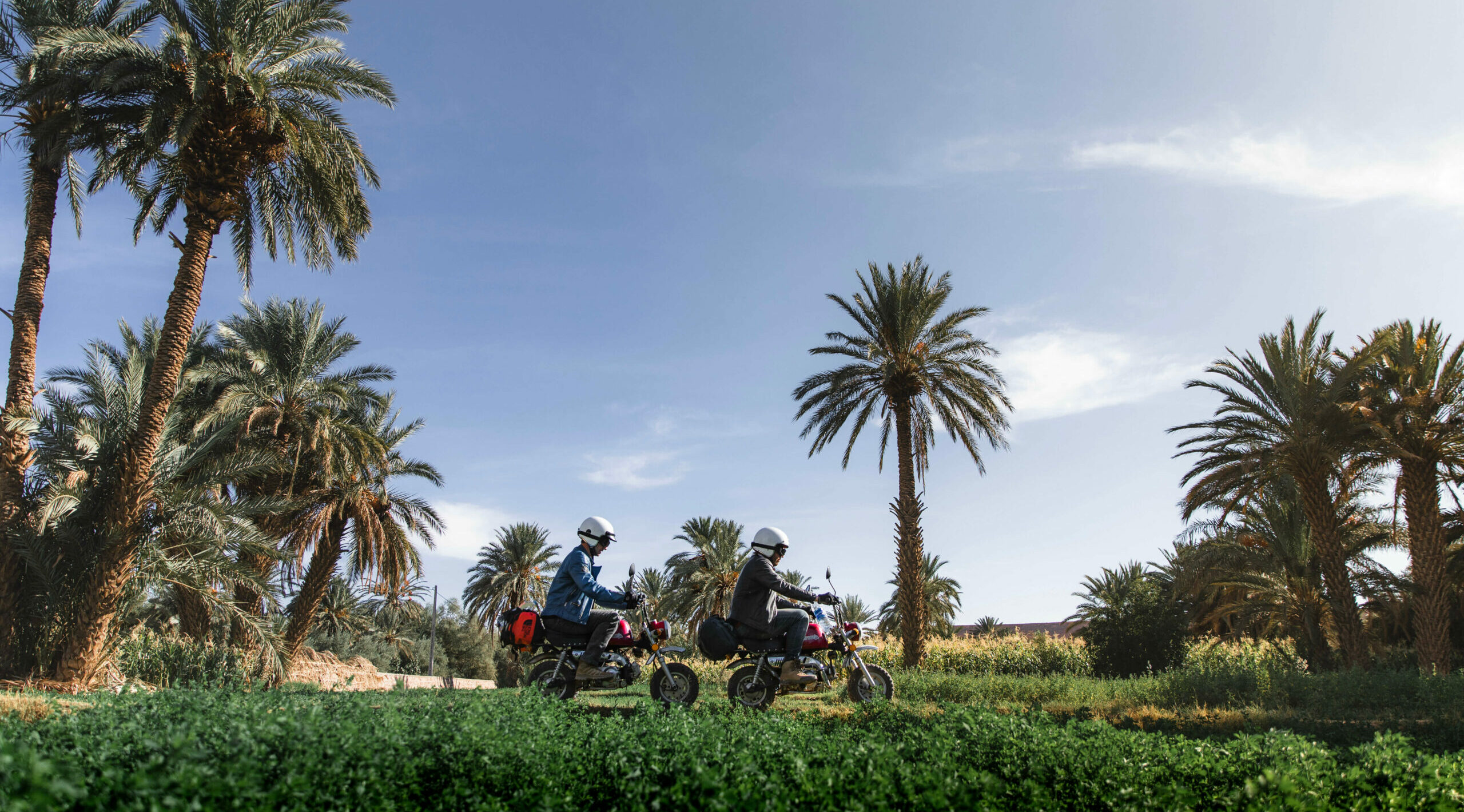 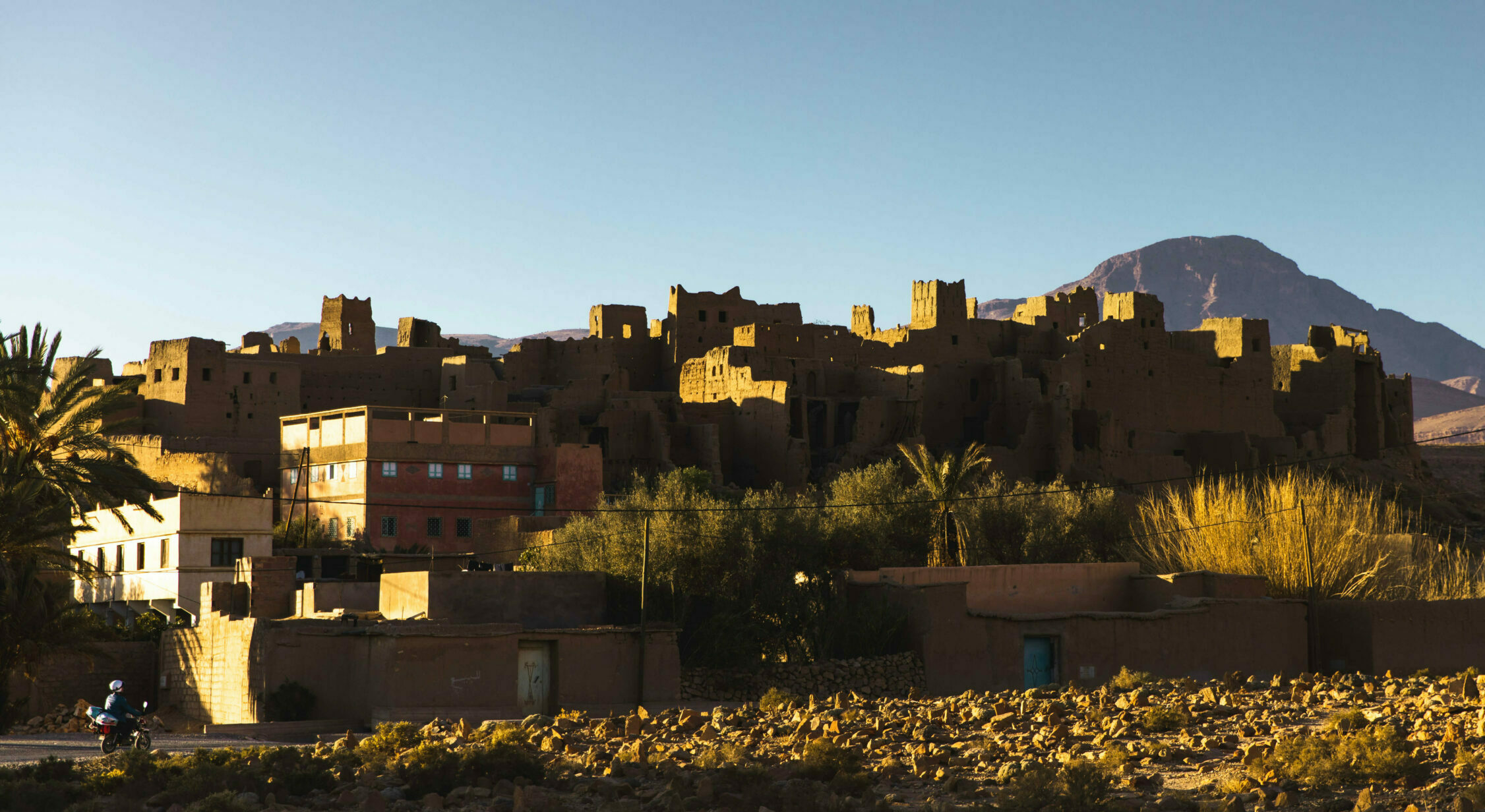 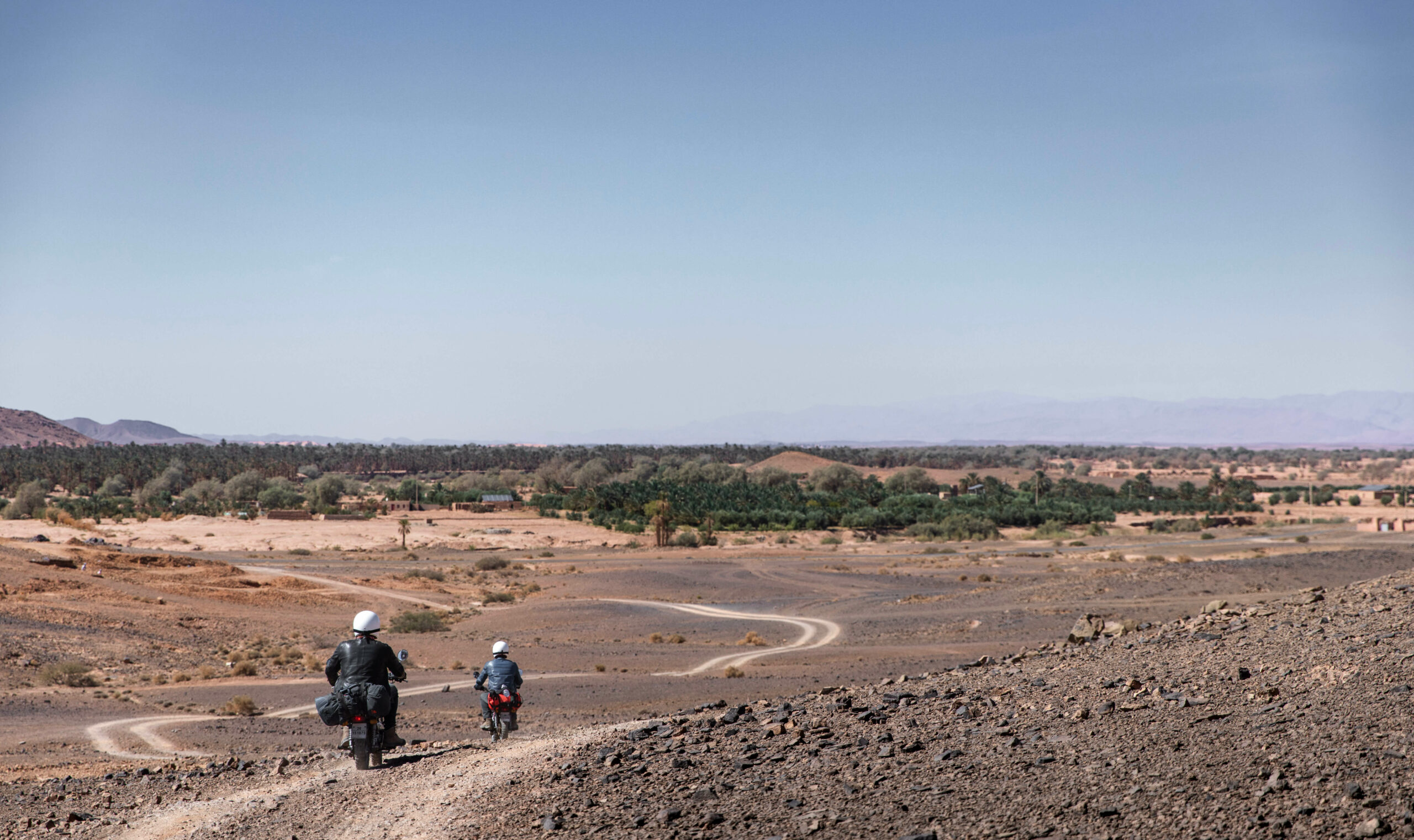 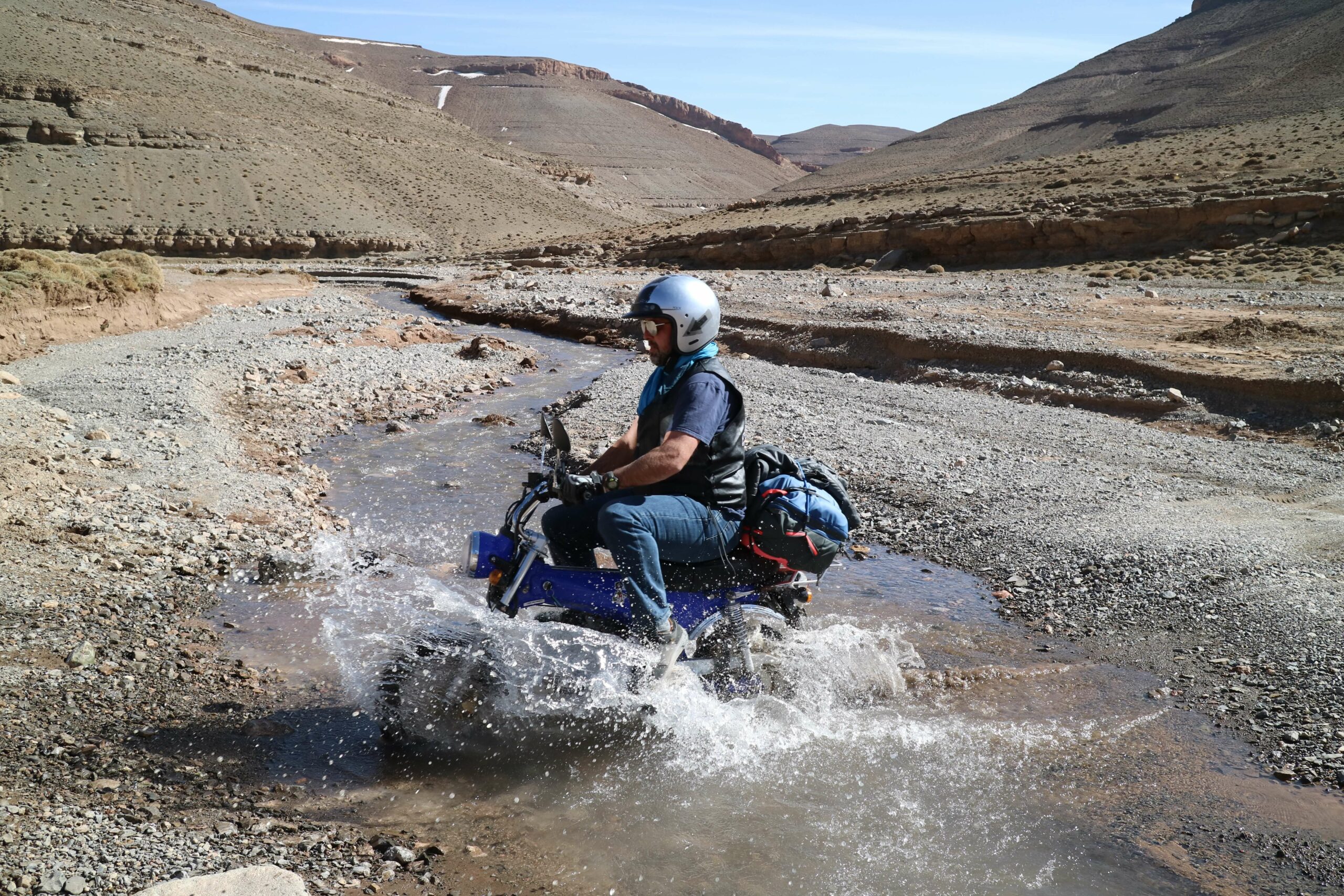 The un-route has been carefully crafted to force you and your 50cc Monkey Bike to tackle the massive Atlas Mountain range. There's no way round it. You can go any way you want but you'll definitely be pushing your monkey up the side of a mountain.

Not only will you lose weight but you'll be driving on some of the most spectacular roads in Africa. 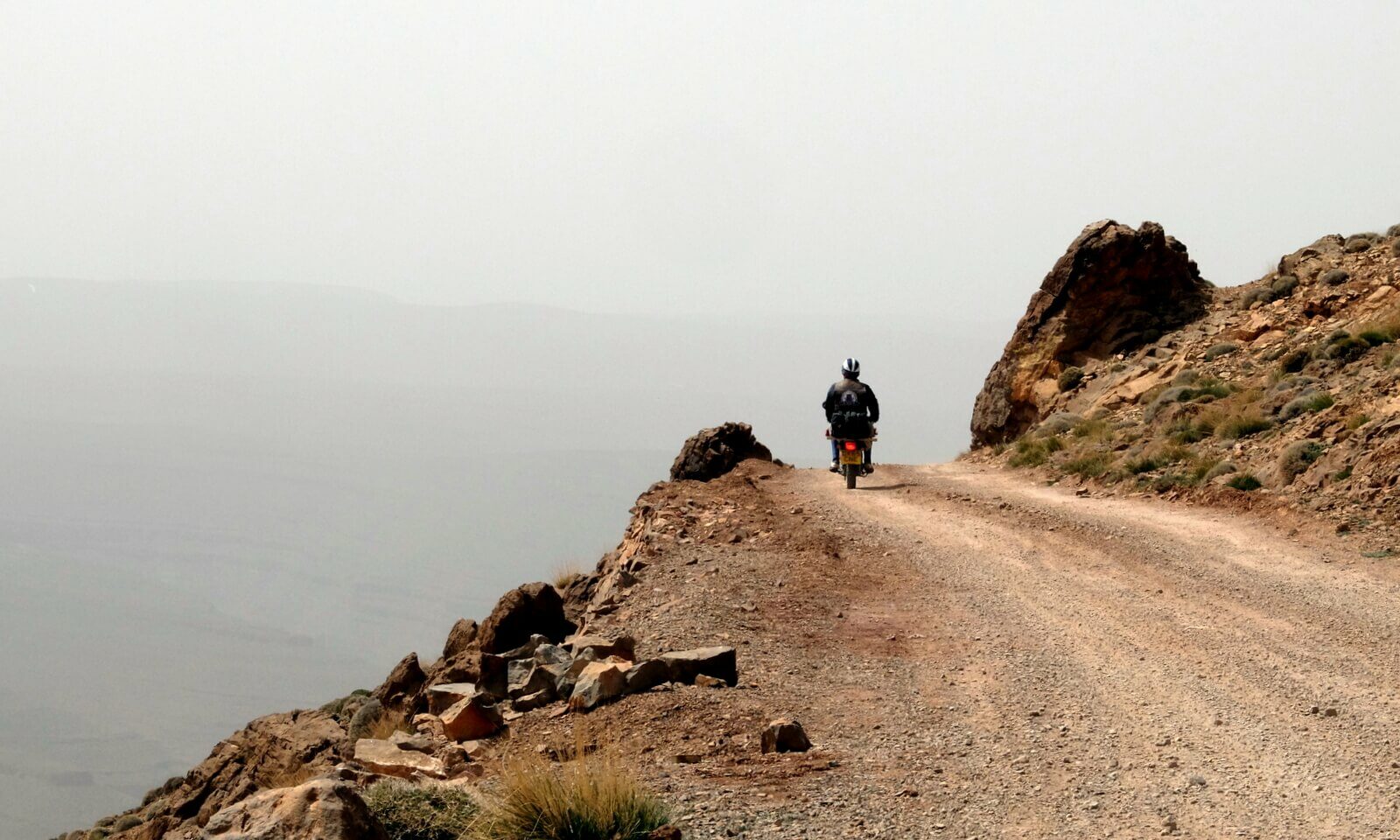 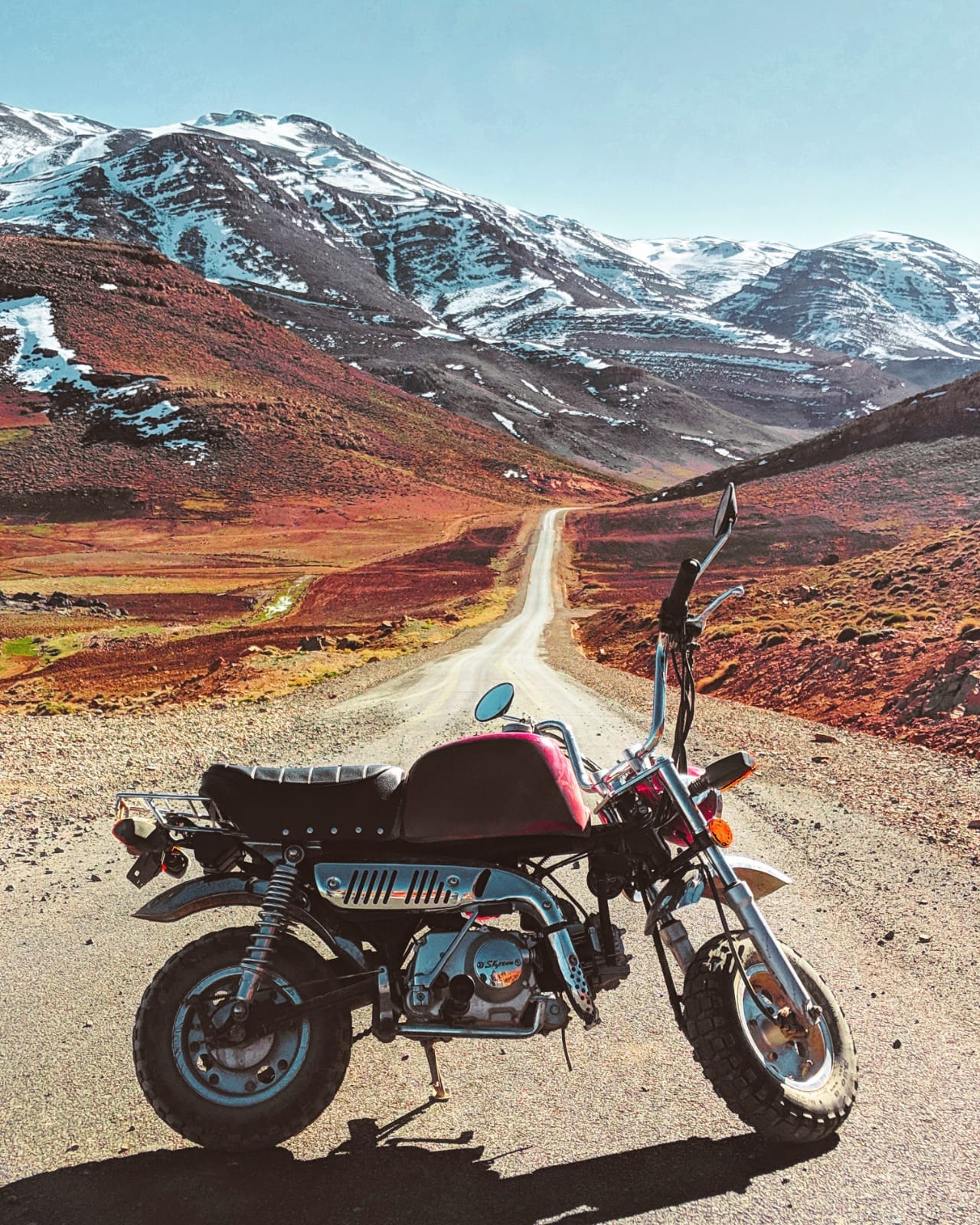 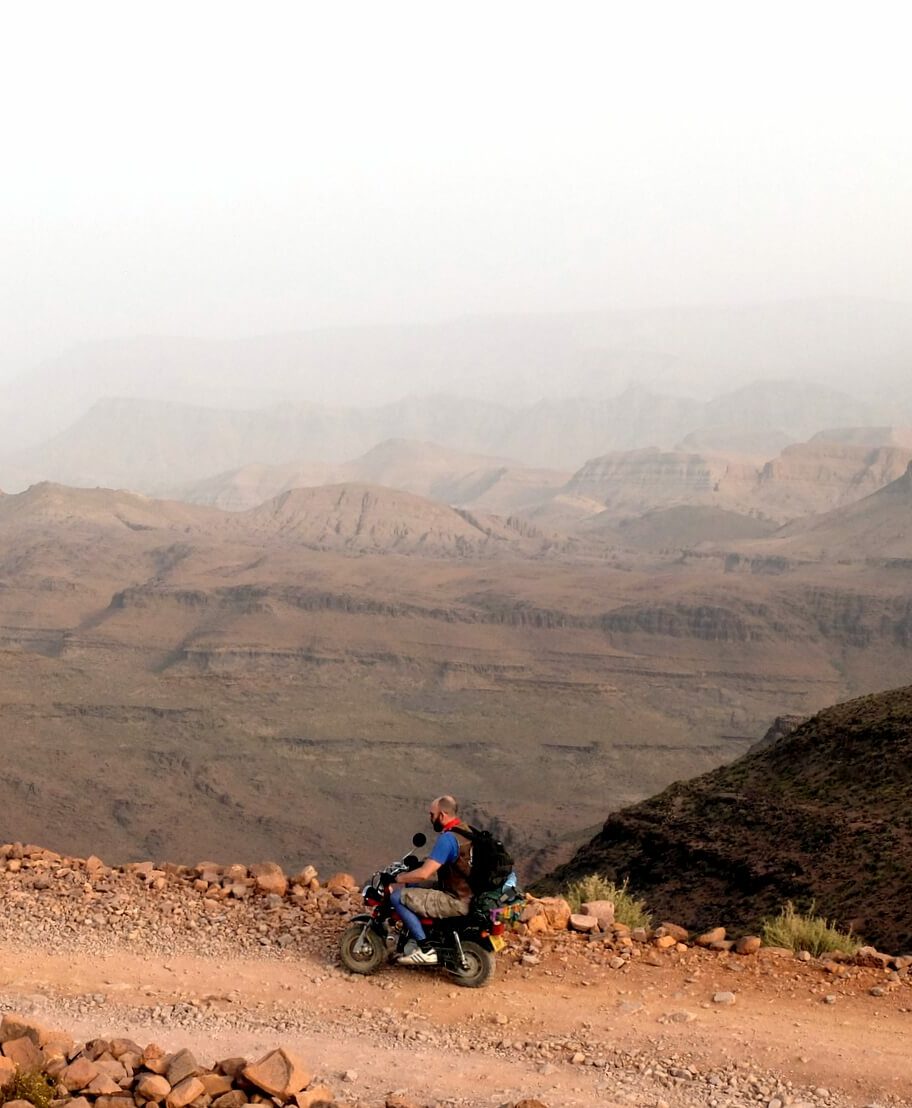 What you get for your entry fee:

• A mighty if diminutive bike to fall in love with

• The bike transported to the start line

• The most ridiculous week of adventuring chaos imaginable

Paying by instalments?
• If you have chosen to pay by instalments then you would have been charged for the first bit immediately. The next payment will come out of your bank automatically around 28 days later. Following payments will come out on the same day each month until the full amount is paid.

"These bikes are completely impractical. That’s why you don’t see thousands of them driving up and down the country. It’s because they’re useless."

What this diminutive bundle of joy lacks in size, it more than makes up for in unadulterated pleasure.

• It's close to the ground, so you don't have far to fall.
• It's about the size of a rollerskate, so will fit through tiny gaps in traffic.
• It's incredibly light, so when it inevitably breaks down it's easy to carry.
• It's mechanically basic so a chimp could fix it.

They also have a super handy luggage rack over the rear wheel which can easily hold your wallet and maybe your keys (probably best to stick to three of four keys). 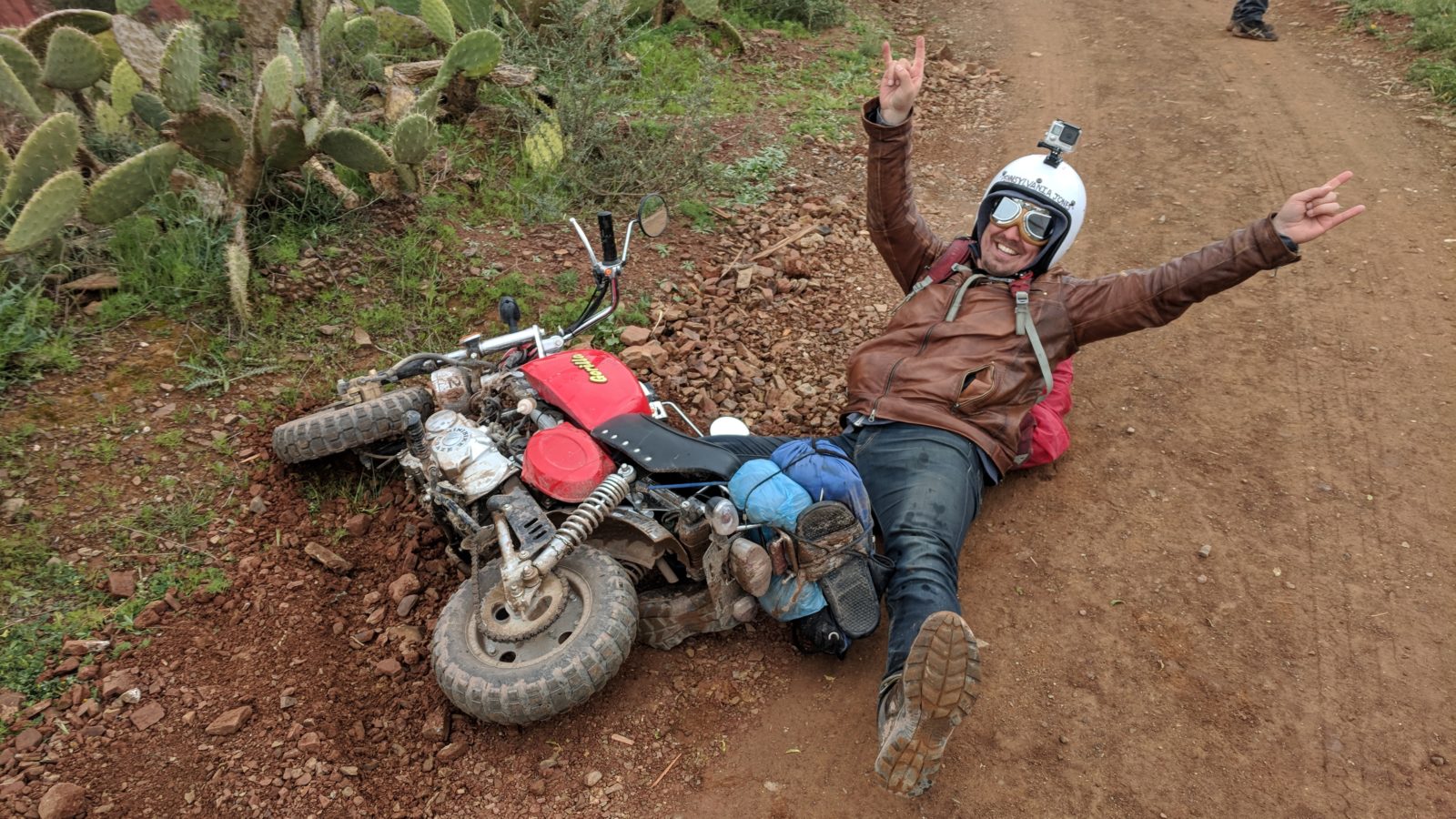 • In Morocco, you can drive a bike up to 50cc without a licence

• When describing the particulars of the event, it would be worth checking your insurers are aware of your driving qualifications. It might be legal for you to whizz around on a 50cc bike in Morocco on your license - but maybe not in your country of origin, this could be a factor in your insurance quest.

• The bikes come with the legally required third party insurance

• You'll need travel insurance to cover you for the whole of the Run. You should make sure it specifically covers you for what you are doing and where.

• For many nationalities, you can get a visa-on-arrival - double check yours before you go.

• We charge a £300 returnable vehicle deposit to make sure we get our bikes back at the end of the adventure, this is fully returnable and we won't charge you for general wear and tear. The deposit will be due around a month before the launch.

• Fuel is mostly available, but less so in the desert

• Likewise with food & water. You probably want to avoid tap-water in more rural areas, unless you enjoy defecating through the eye of a needle

• Camping is the most versatile plan for a place to lay your hat, but you'll find a fair few pensions in the towns & mountains 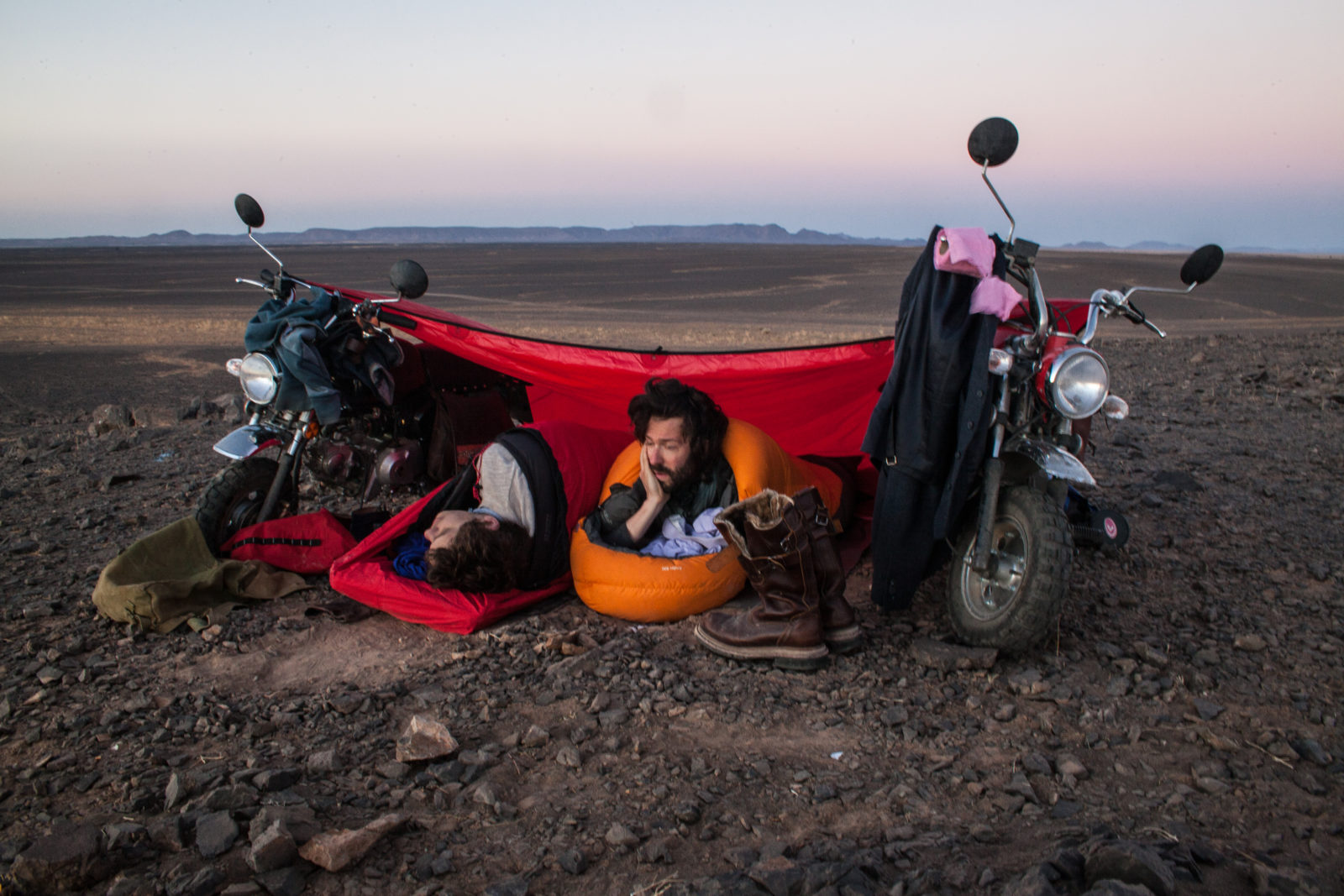 Our day to day lives are controlled so much we rarely get to put ourselves in danger. Which is a shame, because danger has so much opportunity for fun. Or if not fun, great stories to tell when you get home. To give you the greatest chance to seek out your chosen level of danger, you're on your own. That means no backup, no support, no friendly guides to tell you what to do. After all, you're not really in danger if there's a medic, a mechanic and a life coach with you at every turn. Right?

We give you a start line, a finish line, some training and more or less enough time to reach said finish line. The rest is up to you. 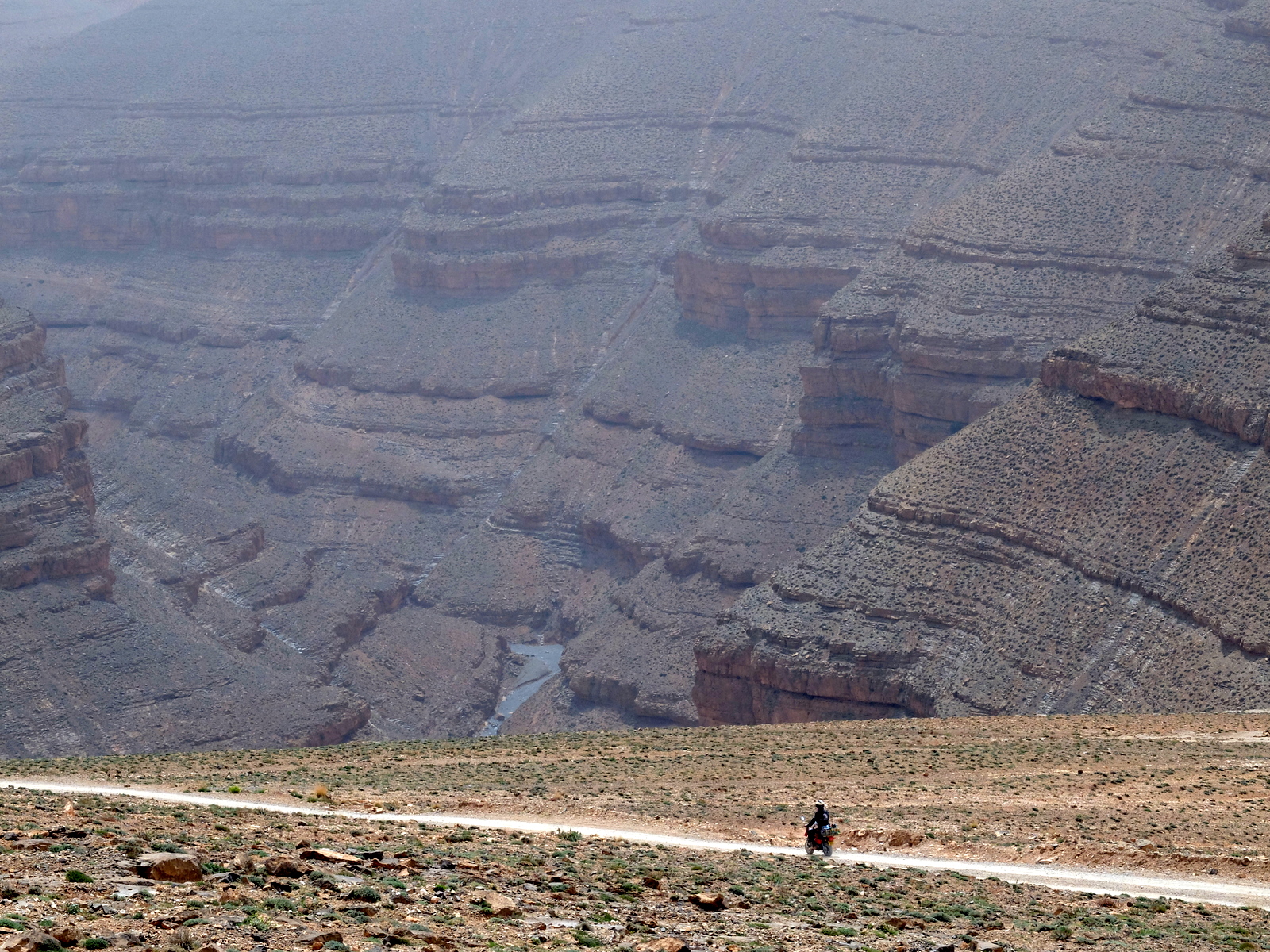 Registration for the Monkey Run is per person. The Monkey Run is perfect for those going solo because, well, you can only fit one person on these bikes. Some do sign up with friends but there are runners that tackle the Monkey Run solo every time. It's easy to meet others during the test driving to convoy for at least part of the trip if you don't fancy going alone. 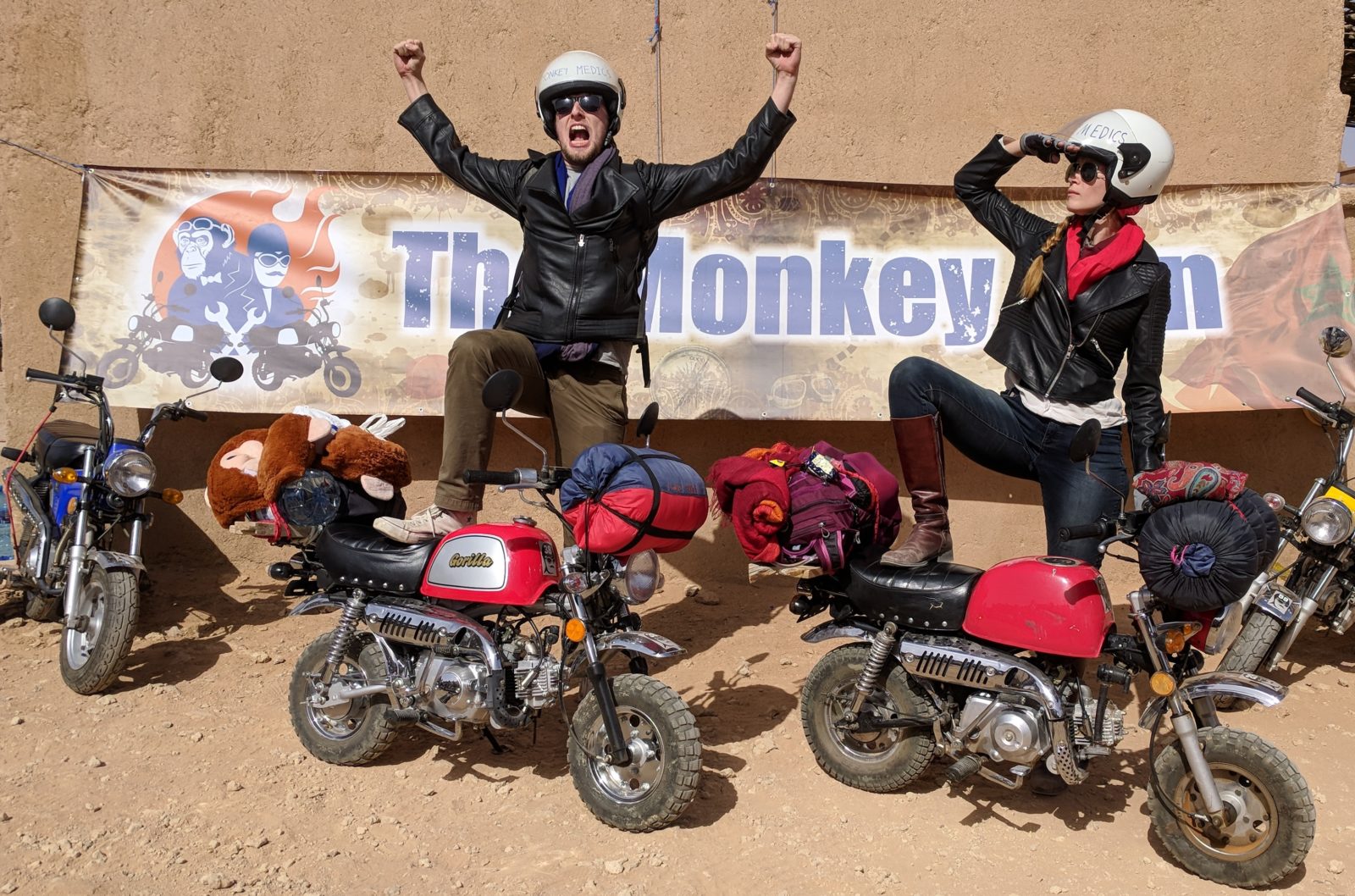 Not only is the Monkey Run an industrial dose of adventure, it’s also about Saving the World. We ask every rider to make their best efforts to raise a minimum of £500 for the official charity Cool Earth Anything above this can be raised for any other registered charity of your choice.

Cool Earth works alongside indigenous villages to halt rainforest destruction. Local people stand to lose the most from deforestation but the most to gain from its protection, that’s why they are the forest’s best possible custodians.

All Cool Earth partnerships are community-owned and led.

By developing local livelihoods, their mission is to end the cycle of deforestation entrenching villages into further poverty. Creating strong, self-determining communities.

These are genuinely dangerous things to do. The website is written in a light-hearted fashion but you cannot overestimate the risks involved in taking part in this adventure.

Your chances of being seriously injured or dying as a result of taking part are high. Individuals who have taken part in past Adventurists' adventures have been permanently disfigured, seriously disabled and even lost their life.

This is not a glorified holiday, it's an unsupported adventure and so by its very nature extremely risky. You really are on your own and you really are putting both your health and life at risk. This is what makes them adventures.